John O’Reilly was the eldest of the three brothers who lived at Turreff Avenue, Donnington. All three were fine players who learned the game both at Adams Grammar and from the former GKN Sankey Club. John dropped out of chess after becoming a catholic priest. Middle brother Michael drifted away from the game to hockey in his teens and now lives in Thailand. The youngest and best, Gerard, probably ranks with John Cox and Charlie Morris as the best of Shropshire's post-war home-grown talent. They were the key constituents when Newport Greens was formed and when Newport first won the division 1 championship in the mid 1960s and again in 1970. The team consisted entirely of Adams Grammar School boys.

At some stage there was also formed a 2nd team called Newport Reds.

John O'Reilly won the country individual title as a schoolboy in 1964 beating the veteran A. Chesterman in a beautifully mature positional game. He entered again in 1967 drawing in the final with Dr.Gemmell. Below is John's winning match in 1964: 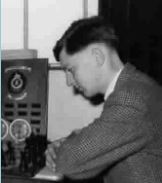 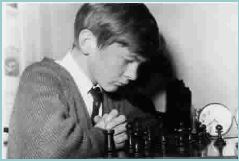 Another dangerous Junior - Warren Lewis
Warren Lewis is the only player we are aware of who played for both Newport Greens and Newport Chess Club. Here is one of his matches as a junior back in 1969 where he demonstrates his knowledge of opening theory.

Sadly Warren passed away, shortly after returning to the club in 2016 following a leave of absence of 45 years.

First league title
Newport Greens were one of the only junior teams to actually win the league title, picking up the trophy in 1970. The winning team consisted of Gerard O'Reilly, Warren Lewis, Peter Griffiths, Mark Whitmore and Graham Jones.

These newspaper cutting are believed to date from around 1971 showing Newport Green at the top of the division again but Newport Red struggling against relegation. 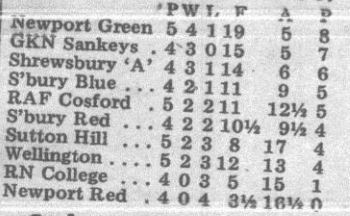 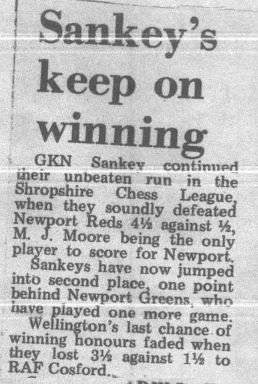 For an unknown reason Newport Chess Club folded at some point in the 1970's.

The Resurrection
Newport Chess Club was reformed in the late 1980's at its present venue, The Royal British Legion, by two players from Shifnal Chess Club; Danny Griffiths and Klaus Waschmutt. An advert was put in the local Newport Advertiser for anyone interested in playing chess to meet on its first night and several attended. Klaus kindly donated the chess sets and boards to get us going and we soon had enough players to enter our first team into the Shropshire League. The club gradually grew in numbers with Nick Rutter soon joining from Telford Chess Club and before long the club could field second and third teams.

The Collapse of a Titan

In 1999 the Coddon empire disintigrated and Carl Portman plus Richard Archer joined Nick Rutter, Tony Holdford, and John Jeggo to take the title to Newport.

Newport won the cox trophy four times in the decade including three consecutive wins between 1993 to 1995  and also 1999 with a team including Nick Rutter, Phil Darmanin, Tony Holdford, John Jeggo, and Mark Hubbuck.

2 of Newport's A team players won the county individual in consecutive years. Carl Portman (pictured) won in 1998 and John Jeggo followed a year later in 1999.

The early 2000's saw a local pupil bursting onto the Shropshire Chess scene. Renowned for his tactical play, Thomas Pym, a student of Adams Grammer School, quickly upset some of the strongest players in the county through no shortage of talent (and crisps). Dave Everington, a verteran Shropshire player, dubbed him "Terrible Thomas" after suffering a particularly heavy defeat one night. Tom won the U10 British Junior Championship in 2000, U12 in 2002 and U13 in 2003. He also represented England many times. Tom was coached by Lawrence Cooper for 7 years. 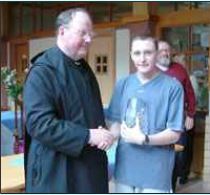 Tom wasn't the only Junior to appear on the scene in the 2000's. The earliest known junior team was formed in 2004. The team consisted of Tom's fellow pupils at Adams Grammar including Christopher Lewis (left), Alex Taylor (top right) and the Baulf Brothers of which the oldest was Max Baulf (right). Other juniors at the club during the period included Tom's older brother, Joe Pym, Gavyn Cooper, Huw Davenport and Thomas Roe (who quite possibly made Shropshire history by obtaining the lowest ever Shropshire grade of 9). Athar Ansari joined the team in 2007. Their school teacher at the time was Ryan Palmer (top left). 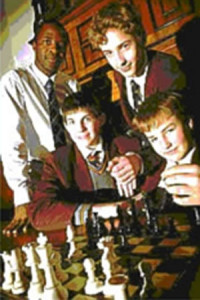 Gavyn Cooper (in white) at the Shropshire congress in 2008. 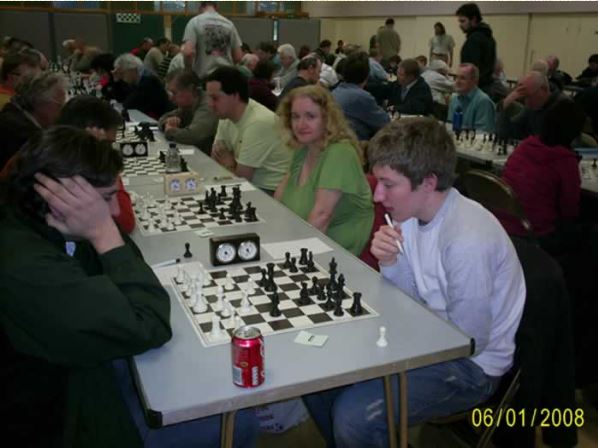 Newport won the league twice in 2006 and 2007 with what was an impressively strong team of Nick Rutter, Tom Pym, Gavyn Cooper, Ryan Palmer and Tony Holdford.

Newport's Narrow Escape
When many of Newport's strongest junior players headed to university, Newport A came very close to relegation for the first time in 2009. And with Newport needing to win their final match by beating Oswestry A by 0.5-4.5 to guarantee staying up things were looking dicey. Luckily some of their (no longer quite so junior) players were able to return for this final match but with Tom Pym and Alex Taylor seemingly struggling, the prospects looked bleak. But both those games turned around and the team just about secured the 0.5-4.5 result they needed to escape the drop, sending down Telepost B in their place who were on equal points but had an inferior ‘goal difference'.

However, it was a special move in a previous match that gave Newport a fighting chance of staying up. With the scores tied 2-2 in the encounter between Telepost B and Newport, Bob Simpson, with the white pieces, had the pictured position against Newport's Nick Rutter. With Simpson having a pawn close to queening, Rutter had his back to the wall.
Can you see the move Rutter made which defused the immediate threats? 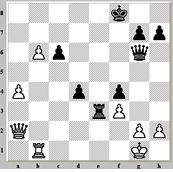 In a simultaneous against Nigel Short in 2011, Nick Rutter emerged as the only victor. 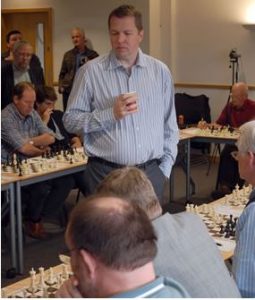 The loss of many of their strongest juniors to university saw the teams struggling at the start of the decade. Newport B got demoted from the 2nd division in 2012 but then won division 3 the following year. The winning team was Danny Griffiths, Athar Ansari, Steve Cooper and Chris Paul.

Newport B once again got demoted in 2014 and again promoted the following year with Steve Cooper replaced by Stuart Ross.

Throughout the decade the league was dominated by 2 clubs, Telepost and Newport. With Telepost pipping Newport to the title in the earlier years, it wasn't until the 2012/13 season that Newport A broke their dry spell to win the league. With the team strengthened by the addition of Nathanael Paul joining from Priorslee, the winning team consisted of Tom Pym, Nick Rutter, Gavyn Cooper, Nathanael Paul and Tony Holdford.

Newport went on to win again in 2015/16 tieing on points with Telepost but winning the league by a goal difference of 2.

In the 2016/17 season the Newport team was bolstered by the arrival of Ian Jamieson who had moved to Newport from Stoke. With Ian winning almost every match on board 4 Newport edged it over their rivals Telepost, once again being tied on points but beating them by a goal difference of 1.

Newport A won the Cox Trophy in 2013 and then again 2015. However at one of the summer events the following year challengers arrived to find Newport players in a state of some anxiety over the "lost" Cox Trophy. Newport had been dethroned by Telepost A in the 2016 final in June. But Newport couldn't find the trophy to give it to Telepost, and inquiries with Telepost confirmed they had not received it.
With fears growing about the missing, or worse, stolen, trophy, it was visitor Gary White, of Priorslee Lions chess club, who took on the Sherlock Holmes role.
"It's behind your bar," he told the Newport players.
A disbelieving band of Newport players then headed for the bar to inspect their trophy shelf.
"There it is," said White, pointing to a shield on prominent display.
And when it was got down, he proved to be right, with the shield clearly being marked as being the Cox Trophy.
"Oh, we were looking for a trophy, not a shield," said Newport's Nat Paul.

Newport won the trophy again in 2018.

2014 saw the introduction of the new rapidplay league. Newport quickly claimed dominion over this league winning the title in 2014, 2015, 2017, 2018 and 2019. In the 2017/18 season Newport pulled off a truly stunning performance not dropping a single point throughout the entire season. The winning team consisted of Nick Rutter, Nick Arkell and Nathanael Paul. 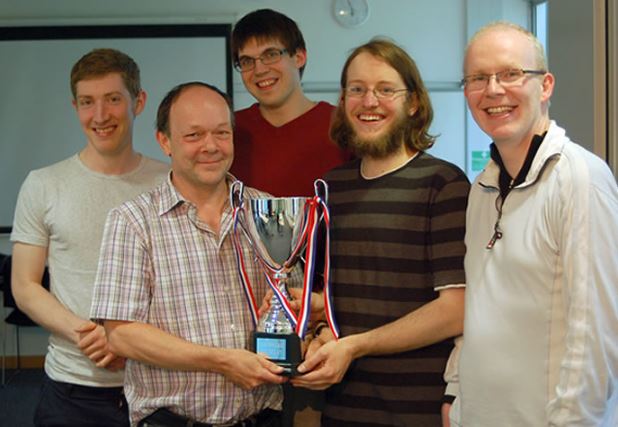 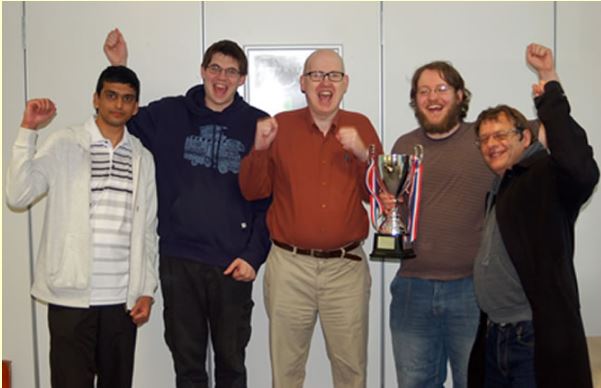 The summer of 2016 saw the introduction of Newport summer events. Afterwards it became tradition for Newport to host 3 blitz tournaments each summer alongside numerous other variants of chess.

2016 also saw the introduction of the annual Newport championship.

Newport B and Newport Juniors Promoted

In 2016 Newport B accidentally achieved promotion into division 1. Despite some valiant performances they unfortunately didn't win a single game and were relegated the following season.

Not to be deterred, in 2019 Newport B won Division 2 and once again headed into Div 1. The winning side consisted of Athar Ansari, Tony Holdford, Stuart Ross, Danny Griffiths and Andy Tunks.

Newport Juniors also achieved their first ever promotion in 2016 coming 2nd in Division 3. The team had been strengthened with the addition of Edison Xu, who was 9 years old at the time but with a grade of 134. With Edison s help the junior team was able to stay in division 2 for a further 2 seasons. Edison won the Newport Championship in 2018.

In the 2017/18 season Newport A fielded what must surely be the strongest side in Shropshire's history. Newport picked up 2 new recruits, Nick Arkell (grade 191) and his brother GM Keith Arkell (237). When added to the likes of Nick Rutter (206),  Ian Jamieson (178) and Nathanael Paul (175), Newport A went on to cruise to their 2nd consecutive victory. At the end of the season Keith held a simultaneous tournament open to all Shropshire players. Sadly this was to be Keith's only season with us.

The fielding of the Arkells caused more than a bit of controversy as the season before they had played a single game for Ludlow who then assumed they would continue to play for them in the 2018/19 season. When the brothers decided to stay at Newport this resulted in Ludlow threatening to storm out of the league unless Nathanael Paul (who was league controller at the time) resigned. You can read the full story here.

Newport A climb to the summit

In 2018/19 Newport A achieved their ambition of the past few years and won every available trophy. We became division 1 champions for the fourth year in a row and although the team no longer had Keith Arkell, they still comfortably romped home to victory without loosing a single match. The team consisted of Nick Rutter, Nick Arkell, Ian Jamieson, Nathanael Paul and Christopher Lewis. There were times when the team were on edge though as Nick Arkell was a nominated player at the start of the season but didn't play any of his games until the last 3 games of the season. If he hadn't played at all Newport would have been hit by a 3 point penalty putting their victory in doubt.

In addition the team sailed to victory in division 1 rapidplay despite losing a match to Newport B. The team also romped to victory in the summer quickplay crushing Mad Wolves 5-0 in the final (L Cooper 1, N Walker 0; N Rutter 1, E Angelov 0; N Paul 1, P Bull 0; C Lewis 1, S Tarr 0; I Jamieson 1, T Preece 0) before displaying their dominance on the live boards beating Maddocks 4-0 in the final of the Cox. And to top it off Nick Rutter added yet another inidivdual title to his cap.

Victory for Newport B
Newport B added to the clubs silverware coming top of division 2 without loosing a match. The winning team was Athar Ansari, Tony Holdford, Stuart Ross and Danny Griffiths.

Promotion for Newport C
It took 8 years but Newport C finally gained promotion from division 3 in 2018/19. The promoted team consisted of Dave Lovegrove, Paul Broderick, Malcolm Price and Willie Gormley who won the promotion battle against Newport D but failed to secure the league title against Shrewsbury C.