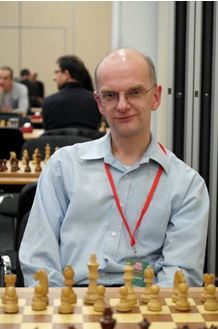 Lawrence Cooper will be giving a simultaneous display at Newport Chess Club in May!

Lawrence has been an International Master for 20 years, and also became an International Organiser in 2011 and FIDE Arbiter in 2016. He captained England in the 2009 and 2011 European Team Championships, as well as the 2010 Olympiad, and coached the Welsh Women's national team in the 2016 Olympiad.

Simultaneous Display Details:
– Challengers play with black
– Normal simul format: players make their move in turn as the simul-giver arrives
– 2-3 ‘passes’ allowed; depends on number of entries
– When there are 3 games left, they will be played out as 3 simultaneous 10-minute games
– No upper rating limit

To enter, players can make their payment either on the evening of the event or online sending your payment to the following account:

However, please make sure that when entering you still book your place with the organiser by emailing nathanaelpaul92@googlemail.com

Entrants will be accepted on the day subject to availability